Air fryers, appliances that use a minimum amount of oil to fry food, are becoming must-have additions to every kitchen. Their popularity is mainly down to the fact that they are a much healthier option than traditional methods of frying. And we all know how much more we are looking after ourselves and paying attention to the healthier options nowadays.

Instead of immersing the food in oil, an air fryer cooks the food using hot air convection with just a small amount of oil which creates a mist to coat the food and fry it without the food sitting in oil and absorbing large amounts.

They typically use 70-90% less oil than the traditional method of immersing the food in oil, in either a shallow pan or deep fat fryer. French fries absorb around 25% of their weight in oil if deep-fried!

I used to see how quickly the level of oil in the bottle next to the hob would go down but there’s definitely a lot less oil going into my food now. The only unhappy person now is my olive oil supplier.

On top of the obvious health benefits, there is an extra lesser-known benefit of these air fryers.

An air fryer is in fact a mini oven that circulates hot air around the food to cook it. That hot air convection can be put to other uses. And one of those is to use it at lower temperatures to dehydrate food rather than cook it.

So to answer the question, ‘Can you use an air fryer to dehydrate food?’, the answer is a definite ‘Yes’.

What Is Dehydrating Food? And Why? 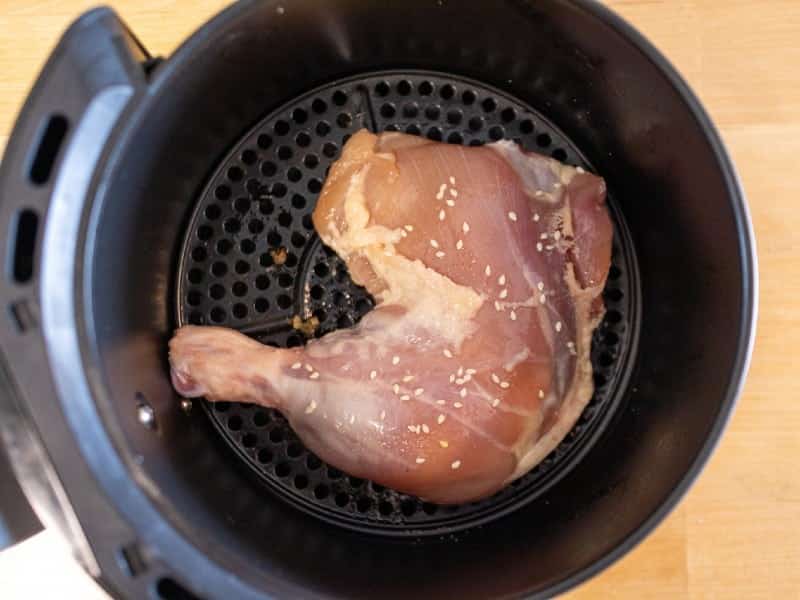 Dehydrating food is drying food, mainly to preserve it, to last longer. For centuries man and woman have been dehydrating food to be able to store it for longer periods, to make it last through the winter months.

Before the existence of refrigerators and freezers, and canning of food and, dare I say it, artificial preservatives to add to food, dehydrating food was very common to stop food going bad. Particularly fruit, meat, and fish. The principle behind this is that bacteria, yuk, need moisture. So if you remove the water from the food, bacteria can’t grow. Voila, long-lasting food.

It’s not as easy as it sounds though because the moisture has to be removed slowly and not at too high a temperature. Too quickly and too hot is, well, just cooking it.

The most common way was to place it on racks and leave it in the sun, which, combined with a breeze would dry it out. Easy in sunny Mediterranean countries, not so easy further North. Fire was also used with food hung or placed nearby, but not too near as to cook it.

Another method of preserving food was salting it, coating it with lots of salt. This was used mainly on meat and fish.

Salt also has the effect of drying the food as the salt pulls the water out of the food. The salt itself has the extra benefit of killing microbes. Well done salt. At least on meat and fish, not so nice on fruit! Salted strawberries anyone? So I think we’ll stick with dehydrating when it comes to fruit.

So Why Are We Still Dehydrating Food?

Another benefit of dehydrating food is that it preserves the nutrients in the food – which brings us back to more modern times and health and fitness. Snacks that are healthy are a godsend. As is anything we can cook and enjoy, that is also good for us.

Not only that, dehydrating concentrates the flavors of the food. It condenses all the flavor down, literally the opposite of watering it down. Healthy AND tasty? What’s not to like?

So now it’s more of a lifestyle choice than a necessity.

Before it was to survive a winter with no crops growing to feed ourselves. Now it’s about having some delicious and healthy dried apricots for your hike, or the kids’ school lunch boxes. Or dried bananas and blueberries with your breakfast in the morning. Yummy and healthy. And so much better homemade. Or should I say, home-dried?

And how about home-dried mushrooms and onions to use in a scrumptious homemade soup?

And one use we probably don’t even think about. Herbs. All those jars in the kitchen of basil and oregano and all their friends aren’t just herbs. They’re dried herbs. They last for weeks and we use them all the time.

Well most of them, maybe not so much the distant cousins at the back of the cupboard.

And not forgetting its original purpose, preservation. The beauty of dehydrating food, yourself, in your own air fryer at home is that it makes your food last longer, so you can make exactly the quantities you use, and store them for use later.

You always have exactly what you fancy at hand with no wastage, saving money. We all love that.

If you grow your own fruit or vegetables then dehydrating your spare crop is a great way to make the maximum use of your homegrown food and minimizing wastage. And save even more money.

It gets better and better. Healthy and tasty and money-saving.

And Why Use An Air Fryer? 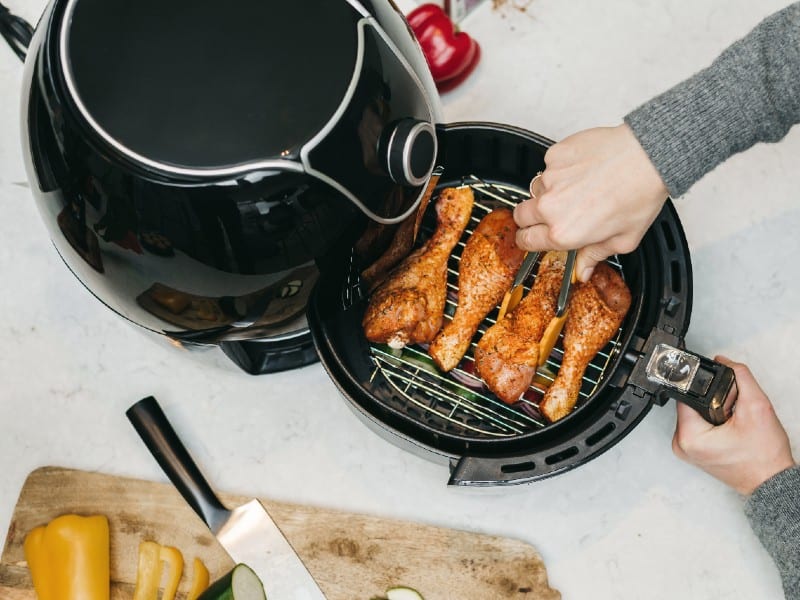 There are 3 key things to look out for to get the best dehydration results.

An air fryer that can do all of the above will be a great dehydrator, it also gives you so much more.

And don’t forget the dried mushrooms, onions, and tomatoes for soups and stews.

And instead of watching those live herb plants wither and waste away on the window sill, turn them into your own dried herbs that last for weeks. All from one appliance that is small enough to sit on the countertop.

And dehydrating food yourself at home only adds to the health benefits as you can do it without the additives used on some products in shops, especially sulfur in dried fruits that can cause a lot of allergies. It’s also very common for oil to be added to give fruits like raisins a shine too.

I think we can cope with raisins that aren’t shiny, especially if it benefits our health. And you can dehydrate products you can’t even get in stores.

There are a variety of air fryers for all budgets, some even have a dedicated setting for dehydrating but most will be able to dehydrate even without a dehydrate button.

To make life even easier and get better results you can get special dehydration racks. Not huge ones shaped from branches and stones that our ancestors used! Small metal ones designed especially for air fryers.

Part of the success of dehydrating food in an air fryer is getting air circulating around the food as much as possible to pull away from the moisture. They’re built to do that already to evenly cook fried food so it’s perfect for dehydration too.

The special racks take it to the next level – of dehydration, as well as height. They are designed to include space to allow the air to flow around the food. So in essence we’re saying that dehydration needs space and time. Sound familiar?

And don’t forget the safety aspect too. Air fryers are stable, enclosed, and with little or no hot oil in them. Compare that to a deep fat fryer full of a liter or more of fat, or an open pan of hot oil sitting on a hob, with a long handle sticking out asking to be knocked by a stray arm. Ouch!

Another worthy read: How to Cook Frozen Mozzarella Sticks in an Air Fryer

What Can I Dehydrate In An Air Fryer?

I’ve already mentioned quite a few foods you can dehydrate. The list is almost endless. Use your imagination and experiment. The most popular ones are:

Make sure there’s no oil in the air fryer if you’re dehydrating food! Oil is for cooking.

Allow time. We’re talking hours here, even days. So don’t think of drying some apricots for the kids when the school bus is coming round the corner. Unless you want them for next week. They can be stored for a long time so may as well do things in advance.

Find the recommended drying times and temperatures for each food. A little tweaking (not twerking!) and trial and error for best results will reap tasty rewards.

Don’t forget to turn the pieces while drying to make sure they dry all over.

Storage – Make sure whatever food you have dried is stored properly. Ziplock bags are great for most things, especially with excess air squeezed out. The beauty is they don’t need to be refrigerated or frozen.

Another read: How To Find The Best Stock Pot For All Your Favorite Soups And More

You can use an air fryer to dehydrate food. It’s a relatively low investment that will open you up to a whole new world of healthy, nutritious, and super tasty foods that last for weeks, months, and even years while reducing waste and saving money. You’ll be so moved, there won’t be a dry eye in the house.

The post Can You Use An Air Fryer To Dehydrate appeared first on Simply Healthy Family.

Can You Use An Air Fryer To Dehydrate was first posted on May 24, 2021 at 2:11 am.
©2019 "Simply Healthy Family". Use of this feed is for personal non-commercial use only. If you are not reading this article in your feed reader, then the site is guilty of copyright infringement. Please contact me at simplyhealthy88@gmail.com